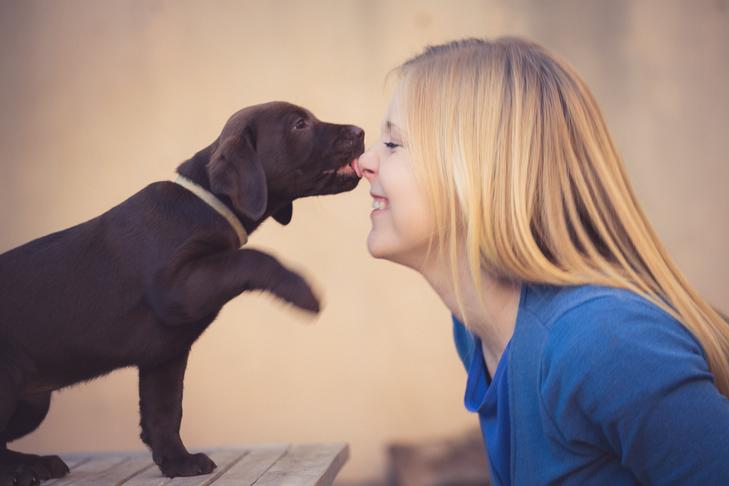 Labrador retriever puppy licking the nose of a woman.

Dogs also use licking as a way to begging for food or attention. Another reason dogs may lick their owners is because they have something called pica, which is an urge to eat non-food items. This can be anything from dirt to carpet fibers to the occasional human skin cell.

While this may sound gross, it’s actually not that uncommon in the animal world – many animals will eat things that we would consider inedible. Pica can be caused by boredom, anxiety, or malnutrition, so if your dog is licking you more than usual, it’s worth checking in with your vet to rule out any health issues. Finally, some dogs simply enjoy the taste of their owner’s skin!

While we may not find it particularly appetizing, our salty skin must taste pretty good to them (think about how much you like chips!). So if your dog starts giving you lots of kisses out of nowhere, don’t be too alarmed – they’re just showing you some extra love.

There are a few reasons why dogs may lick their owners. One reason is that they may be trying to show affection. Dogs often lick people as a sign of submission or respect, similar to how they might greet another dog.

They also might simply enjoy the taste of their owner’s skin. Additionally, some experts believe that licking could be a way for dogs to get attention from their owners or to solicit food.

What Does It Mean When a Dog Lick Its Owner?

There are a number of reasons why your dog may lick you. It could be that they’re trying to tell you something, such as that they’re hungry or thirsty. Or it could be a sign of affection.

Dogs often lick their owners as a way of showing them love and appreciation. It’s also possible that your dog is licking you because you have something on your skin that tastes good to them, such as salt from sweat or a drop of food. If this is the case, it’s best to discourage the behavior by moving away from your dog when they start to lick.

Whatever the reason for your dog’s licking, it’s important to remember that it’s normal behavior and nothing to worry about. If you’re concerned about excessive licking, speak to your vet who will be able to offer advice on how to stop the behavior if necessary.

What is a Dog Telling You When He Licks You?

A dog’s tongue is covered in bacteria, which is why they often lick their own wounds to clean them. When a dog licks you, he is essentially giving you a big wet kiss and transferring some of that bacteria to you. While it may not be the most sanitary gesture, it is a sign of affection from your furry friend.

So what exactly is your dog trying to say when he licks you? It could mean any number of things, but here are some of the most common interpretations: 1. I love you: This is perhaps the most obvious meaning behind a dog’s lick.

If your pup licking you is accompanied by wagging tail and lots of doggie kisses, then there’s no doubt that he’s expressing his love for you. 2. I’m sorry: Just like humans, dogs can feel guilty after doing something wrong. If your dog has been caught red-handed (or paw-ed) and starts licking you as a form of apology, chances are he knows he did something he wasn’t supposed to do.

3. I’m stressed: Dogs often lick themselves when they’re anxious or stressed out as a way to self-soothe. If your pup starts licking you more than usual, it could be an indication that he’s feeling overwhelmed or needs some extra reassurance from you. 4. I’m hurt: As we mentioned before, dogs will sometimes lick their own wounds as a way to clean and heal them.

Why Do Dogs Lick People? | INSIDE A DOG'S BRAIN

Why Do Dogs Lick Their Owners Feet

Dogs have a long history of being man’s best friend. One of the things that make them such great companions is their tendency to show affection in many different ways – including licking their owner’s feet! While it might not be the most pleasant experience for everyone, there are actually a few reasons why dogs might lick feet.

One possibility is that they simply enjoy the taste or smell of their owner’s feet. This could be due to the fact that our feet often sweat and release natural oils that can be appealing to dogs (and other animals). Additionally, some people use lotions or other products on their feet that might also make them more appetizing to canines.

READ  10 Goldendoodle Puppies Facts To Make You Fall In Love


Another reason why dogs might lick feet is because they see it as a sign of affection. In the canine world, licking is often used as a way to show submission or respect. So, when your dog licks your feet, they could simply be trying to show you how much they love and appreciate you!

Finally, it’s also possible that your dog is just trying to get attention from you. If you usually provide positive reinforcement (i.e., treats or petting) when your dog licks your feet, then they’ll likely continue doing it in hopes of getting more of those rewards. Whatever the reason behind your dog’s foot-licking behavior, it’s important to remember that it’s perfectly normal and there’s no need to worry about it unless it becomes excessive or bothersome.

If you don’t want your dog licking your feet all the time, simply provide less attention or rewards when they do it and eventually they should catch on and stop performing this behavior as frequently.

Why Do Dogs Lick You When You Pet Them

Dogs also use licking as a way to communicate with other dogs and humans. For example, they might lick your hand to let you know that they want to be petted.

Dogs often lick their owners’ faces as a way of showing love and appreciation. However, there are also times when dogs will lick people’s faces as a sign of submission or fear. If you see a dog licking another dog’s face in an aggressive way, it’s likely that the aggressor is asserting dominance over the other dog.

And if you have a fearful or submissive dog who frequently licks your face, it’s possible that he’s doing it as a way of appeasing you or trying to avoid punishment.

READ  What is a Teddy Bear Cut for Dogs?
In any case, it’s always best to consult with a professional trainer or behaviorist if you’re concerned about why your dog is licking people’s faces. They’ll be able to help you understand your dog’s specific behavior and suggest ways to change it if necessary.

What Does It Mean When a Dog Licks Your Hand

We all know that dogs like to lick things. They lick their own body parts, other dogs, and even our face and hands. But why do they do this?

And what does it mean when a dog licks your hand? There are a few different reasons why dogs might lick your hand. One reason is that they’re trying to show you affection.

Dogs licking is a way of them giving kisses, and they often do it when they’re happy or excited to see you. It’s also thought that by licking your hand, they’re trying to find out more about you. Dogs have a very keen sense of smell, and licking allows them to pick up on your scent.

This could be why puppies often lick their mother’s face – they’re trying to familiarize themselves with her smell. Another reason for dogs licking is because they want something from you – like food! If your dog starts licking your hand while you’re eating, it’s likely that he’s hoping for a little taste of what you’ve got there.

Some dogs will also lick people as a sign of submission or respect. So if your dog licks your hand while you’re petting him, he may be doing it as a way of showing deference to you as the alpha leader in his pack. Whatever the reason behind it, one thing is for sure – being licked by a dog feels pretty good!

Their tongues are rough but also soft, and the sensation can be quite soothing (especially if you’ve had a long day). So next time your pooch comes over to give you some slobbery kisses on the hand, just enjoy it – and try not to think too much about where that tongue has been before!

Dogs lick their owners for many reasons. They may be trying to show affection, get attention, or taste something that smells good. Some dogs also lick because they are anxious or have a medical condition that causes them to lick excessively.

If your dog is licking you more than usual, it’s important to consult with your veterinarian to rule out any potential health problems. 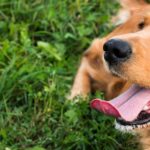 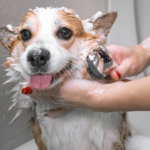