Dogs sigh for a variety of reasons, just like people. When we sigh, it’s often because we’re feeling overwhelmed, stressed, or sad. Dogs likely feel the same way.

A dog’s sigh can also be a sign of relief, contentment, or even happiness. If you notice your dog sighing more than usual, it might be time to take a closer look at what’s going on in their life and see if anything is causing them stress.

Why Do Dogs Sigh? | what does it mean when a dog sighs deeply

And still others believe that a dog’s sigh is simply a way to release excess energy. So, what does it really mean when a dog sighs? Unfortunately, there’s no one-size-fits-all answer to this question.

It likely depends on the individual dog and the context in which the sighing is occurring. If your dog seems happy and relaxed when he or she sighed, then it’s probably nothing to worry about. But if your dog seems stressed or uncomfortable, it might be worth checking in with your vet to rule out any health issues.

Why Does My Dog Sigh When She Lays down

There are a few different reasons why your dog may sigh when she lays down. It could be a sign of contentment, relief, or even sadness. If you notice your dog sighing more often than usual, it’s important to pay attention to her body language and overall behavior to see if there’s anything else going on that might be causing her distress.

Here are some common reasons why dogs sigh: Contentment: A lot of times, dogs will sigh when they’re finally settling down after a long day of playing or being active. It’s a way of letting out a big breath and saying, “Ahhh, I’m so happy and content right now.”

Just like humans, dogs need time to relax and decompress after a busy day. If your dog is regularly sighing when she lays down at the end of the day, it’s probably because she’s just happy to be chilling in her comfy spot.

READ  What Do Dogs Love the Most?
Relief: Dogs may also sigh when they’re feeling relieved about something – like finally getting food after being hungry or getting petted after being anxious.

If your dog suddenly lets out a big sigh while you’re petting her belly, it could be a sign that she was really enjoying the affection and is now feeling much better. Sighing can also be a way for dogs to release built-up tension or anxiety. So if your pup has been through a stressful event (like going to the vet), you may notice her letting out some big sighs afterward as she relaxes back into normal life.

Sadness: While not as common as the other two reasons, sometimes dogs will sighed because they’re sad or upset about something. If your dog is droopy-eyed and giving you long puppy-dog stares before letting out a deep sigh, it could be an indication that she’s feeling blue about something. This is usually temporary sadness though – like if another pet in the house passed away or you went on vacation without her – so don’t worry too much if this is the case.

Do Dogs Sigh When Annoyed

Dogs sigh for a variety of reasons, but one of the most common is when they’re feeling annoyed. If your dog has been sighing a lot lately, it’s likely that something is bugging them. There are a few things that can cause dogs to feel annoyed.

A bored dog is often an angry dog, so make sure your pup is getting plenty of playtime and walks. If you think your dog might be feeling annoyed, pay close attention to their body language and see if you can identify what might be causing the problem. Once you know what’s bothering them, you can take steps to fix the issue and help your furry friend feel better!

Why Does My Dog Sigh When I Cuddle Him

READ  Can I Give My Dog Vitamin C?


Whatever the reason, it’s clear that your dog enjoys spending time with you and appreciates your affection. So keep on cuddling!

Why Does My Dog Sigh When I Pet Her

There are a few possible explanations for why your dog might sigh when you pet her. One possibility is that she’s experiencing pleasure and contentment from the physical affection. Dogs often sigh when they’re feeling relaxed and happy, so it’s likely that your pet is just enjoying the moment.

Or, if she sighs after you’ve been petting her for awhile, she may be trying to indicate that she’s had enough and would like you to stop. If your dog only occasionally sighs when you’re petting her, there’s no need to worry. However, if she does it frequently or seems distressed while doing it, it’s worth talking to your vet about what might be going on.

They can help rule out any underlying health issues and provide guidance on how best to proceed.

Why Do Dogs Take a Deep Breath before Sleeping

There are a few theories as to why dogs take deep breaths before sleeping. One is that it helps to relax their muscles and prepare their body for sleep. Another theory is that the deep breathing allows them to take in more oxygen, which can help to improve their quality of sleep.

Whatever the reason, it’s clear that taking a few deep breaths before bedtime is a healthy habit for our furry friends!

What Does It Mean When a Dog Sighs Deeply?

READ  10 Maltese Dog Facts To Make You Fall In Love

What Does It Mean When a Dog Exhales Loudly?

There are a few possible reasons why your dog might be exhaling loudly. One possibility is that they’re suffering from reverse sneezing, which is when the soft palate and throat spasm, causing them to make an abnormal breathing sound. This is usually nothing to worry about and doesn’t require treatment, but if it’s happening frequently or your dog seems distressed, it’s worth checking with your vet.

Another possibility is that your dog has an obstruction in their airway, such as a foreign object or a build-up of mucus. This can be more serious and may require medical attention. If you think this might be the case, take your dog to the vet as soon as possible.

Finally, some dogs just have naturally “loud” respiratory systems and tend to exhale more forcefully than others. This isn’t anything to worry about and doesn’t indicate any health problems.

Are Dogs Annoyed When They Sigh?

No, dogs are not annoyed when they sigh. In fact, they often do it as a way to release stress and tension.

We all know that dogs are capable of making a wide range of sounds, from barks and growls to whimpers and howls. But what about a dog sigh? What does it mean when your furry friend lets out a big sigh?

Most of the time, a dog sigh just means they’re content. It’s often accompanied by a happy expression and may even be followed by a little doggy smile. So if you see your dog sighing while they’re lying next to you on the couch or getting their belly rub, chances are they’re just enjoying the moment.

Sometimes, however, a dog sigh can indicate that they’re feeling stressed or anxious. If your dog is sighing more than usual, take notice of their body language and overall demeanor. If they seem tense or uncomfortable, it might be worth taking them to the vet to rule out any potential health issues. 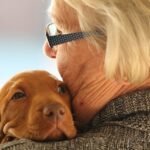